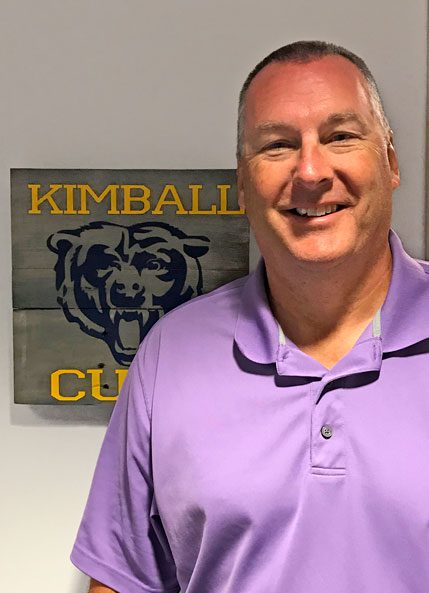 Clay Anderson, a 1982 Northfield High School graduate, is the new activities director and head football coach at Kimball Area High School. Anderson graduated from St. Olaf College in 1986, and he holds a Master’s Degree in Education through St. Mary’s University. Clay’s wife Melissa Radeke is superintendent of schools at Lester Prairie. The Andersons have a daughter Kalah who lives with her husband Bryan in Hubert,
N.C. where he is a doctor in the Navy. Their daughter Lily is 2. Having spent 32 years in coaching, Anderson, with his current KAHS position, enters his 23rd year as a head coach. Clay’s activities director experience spans 20 years, and Kimball is the fifth school at which he assumes those same duties.

Anderson is anxious to get the season under way, and he plans to hold practice 12 times in three weeks, as allowed by the MSHSL (Minnesota State High School League). “I am really excited about the upcoming year, and wish we were playing now. Normally, I do not know a lot about the players that I will have, but I worked with them some in the summer, and I loved their attitudes. I’m eager to see what happens when the season finally gets going,” Coach -Anderson said.

The coach hopes that the team is open to learning a new system, and that they move along as quickly as possible. “This will take a positive attitude and strong work ethic,” added Anderson. The pandemic has been very frustrating to all athletic directors, statewide, as they struggle with getting any concrete answers to questions, since things can change so quickly. “This makes planning nearly impossible. For instance, the league still has not said when basketball will start and finish for the upcoming year. We know it will be a shorter season with fewer games, but we do not know when that will happen; hence making a feasible and concrete plan is nearly impossible. I, as an athletic director, like to work a year ahead, so this has obviously been very frustrating!” said Anderson.

Though Clay’s career platter is plenty full, he still tries to let loose from time to time. “My hobbies are golfing and boating. Additionally, I come from a card-playing family. My parents taught me how to play Bridge when I was in first grade,” coach explained.

Coach Anderson’s philosophy on football and life is simple. “I really like to talk about focusing on our future. Our past is our past (good or bad), and we cannot do anything except learn from it. But we can always change our future and make ourselves better people and players. I also like to talk about positive attitudes. Would we rather be an energy giver (someone who builds up others); or would we rather be an energy drainer (someone who always brings others down)? Hang out with energy givers!” – Clay Anderson